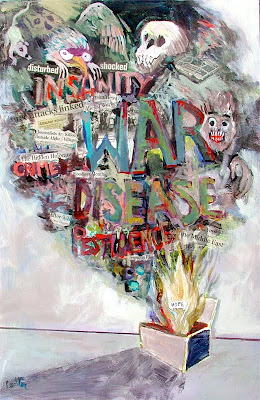 i feel like writing. typing. whatever. it’s all the same to me. there’s something soothing about the melody that comes from my fingers tapping on the keys and the sound that tapping produces. a rhythm and a chord. maybe it’s hard for you to hear it.

and yet, when i clicked on new post, i stared at the white, framed by the gray, framed by more white, with the orange and blue above and below, and was at a loss.

the boy, the one who wants nothing more than friendship from me, the one i’ve been crying over for the past twelve hours or so and will, no doubt, cry for at least twelve dozen more…the boy believes i have reservations and internal conflicts.

of course i do.

but unlike everyone else, i don’t expect anyone to fix those things. i don’t want that.

which is what i said.

and he said he hadn’t meant to imply that he thought i was.

i wanna be a recluse.

it’s easier. it has to be easier.

can’t i just stay holed up in my house? why do i have to see people? they don’t want to see me.

i’m sure i could think of other things to add to the list.

i know i could.

but if i were broken, i wouldn’t SAY i wanna be a recluse. i would BE one.

people make all these assumptions about me.

but every now and then, when those reservations and conflicts are at their most ominous and threatening, i want my mind to think of other things besides all that badness.

i want my mind to be like pandora’s box. sure, there’s all that hideousness in there, but there’s hope, too.

but every time i find the hope, it’s snatched from me…like a bad pass that’s barely caught, and ruled incomplete by the referee because the receiver didn’t have control of the ball when he got his hands on it.

i hoped. god, i hate hoping.

i forgot for a second who i was.

i started to think of who i could be. and then i got scared of her, or scared of him, and like the aggies defensive line against the texas offense in the upcoming a & m/t.u. debacle, fear will run the ball more successfully, thus gaining more yards and scoring more touchdowns, and i will be helpless in stopping it.

and i’m well aware that it’s entirely possible that i let the fear run over me on purpose.

for a second, i believed a guy like him could want to be with a girl like me because he’d said once that he enjoyed engaging in our witty and intelligent conversations, that he thought i was intriguing, and he asked to spend time with me.

so reservations and internal conflict.

yeah, i have those.

i’ve been drowning in this tank for weeks now, it seems. i keep scrambling for the surface, but the current keeps shoving me down. or hell, maybe it’s like some prefer to suppose and it IS me doing the shoving. who knows?

fifteen years ago, i had this delusion that just because my moods shift so constantly, so rapidly doesn’t mean i can’t be loved by some man.

my peers told me no one would ever marry me because no one wanted to wake up next to something that ugly in the morning. that i wouldn’t amount to anything. my teachers said i would never graduate from high school or get a college degree. and what kept me going was a knowledge that they were wrong about me.

of those, i’ve only proven the teachers wrong. and i’m starting to think i might have been.

but i hurt. and there are days where the pain is immense.

yesterday at work, a customer said, your face says happy, but your body language says otherwise.

and all this badness that i’ve been battling for the past twenty-five years…eventually it will break me, because i’ll be too tired to battle it anymore.

One response to “pandora’s box”