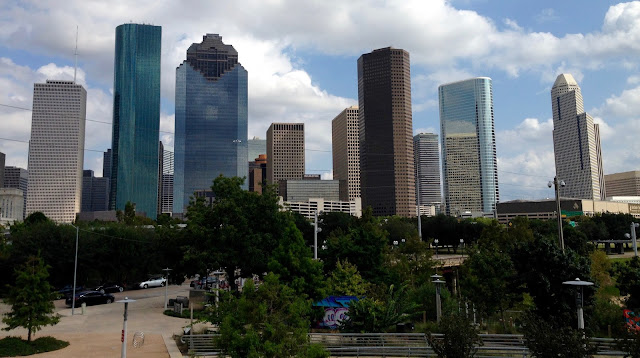 one. september third. skyscraper day. travel to the nearest metropolitan area (if it’s within a reasonable distance) and take a picture of the skyline. if the distance is too great, dig through your travel photos for a favorite skyline shot.

downtown houston, as seen from some steps near lee and joe jamail skate park.

two. september sixth. read a book day. if you’re anything like me, you’ve got stacks of books you’ve been saying i’m going to read this… someday. someday’s here. pick one that’s been on your to read list for far too long. read some.

six impossible things by fiona wood. i bought this ages ago. i want to like it. so far i’ve yet to be able to do so.

three. september eighth. pardon day. what unforgivable curses have been used on you and by whom? find the strength to forgive one person, and be brave enough to confess the forgiveness.

i wrote a letter, though i didn’t get around to it until today, so technically, this was a bust. won’t share the details here. hopefully it’ll be received well. if not, so be it.

four. september ninth. teddy bear day. donate a new teddy bear to a children’s hospital. i had lunch with a friend from high school a couple of weeks ago, and afterward we went to toys r us and got these three. aren’t they happy? more importantly, they are SO soft. while i wish i could give more, i’m pleased to give these three.

five. september twelfth. national video games day. what was one of your favorite video games to play in your childhood? find an arcade that has that game and play some.

i played a couple of games of ms. pacman at the movie theater before seeing spider-man: homecoming on the first, but i didn’t take a photo… so i’ll let yall decide if it counts or not.

six. september thirteenth. fortune cookie day. snag six fortune cookies. give five to your friends or family, and keep one for yourself. what’s it say?

mine said: you will be happily surprised by a long time friend.

seven. september seventeenth. national women’s friendship day. of your girl friends, which have you known the longest? what’s sustained that friendship? send a note letting her know how much you value her presence in your life.

i wrote a friend i’d made when i was three. i’ve not seen her since i was eight. but we found each other on facebook last year, and i’m so, SO happy we did so.

eight. september twenty-first. world gratitude day. this one’s got two parts. ONE) on this day, make a concerted effort to say THANK YOU if someone pays you a compliment. women are so bad at shrugging off positive attention, like we don’t deserve it. like the other day when a friend commented how sweet i was, i contradicted the compliment. if someone says THANK YOU, instead of saying NO PROBLEM say YOU’RE WELCOME. TWO) as you go through your day, make a list of everything you see for which you are thankful. there’s a notes app on your phone. USE it. if you do it right, by the end of the day, it should be a rather long list. type it up. send it to me. i’ll be grateful for the mail. 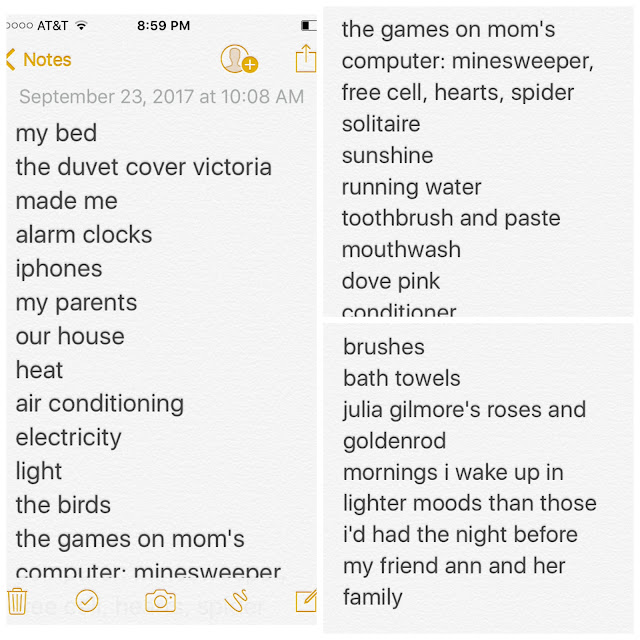 this one was a bust, too. i forgot about the first part and only worked on my list for about two minutes at the start of my day.

nine. september twenty-eighth. national good neighbor day. check in with one of the folks who lives nearby, if not next door. take fifteen minutes out of your day to visit.

i didn’t do this one, either. she has a black and white cat that likes to hang out in our yard. i played with him a couple of times. does that count?