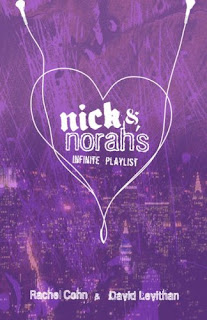 NOT the film. the film blows. huge, HUGE chunks. it’s most assuredly one of the worst adaptations i’ve ever seen.

i LOVE the book.

even if it is teen fiction.

and there’s SO much i like about this book that i could blog about it for a significant period of time, which i don’t (and you don’t) have, so i’ll give you snippets from nick’s first chapter and from norah’s. because that’s how it’s written. nick gets one, then norah, then nick again, and back and forth, and back and forth for the whole of some near two hundred pages. it’s a quickie read, but more importantly, a fun one.

there’s nick, who, stupidly, is still hung up on his no-good-ex tris. and norah, who’s trying to keep her friend caroline out of trouble. and there’s a long night ahead of them both.

the day begins in the middle of the night. i am not paying attention to anything but the bass in my hand, the noise in my ears. dev is screaming. thom is flailing, and i am the clockwork. i am the one who takes this thing called music and lines it up with this thing called time. i am the ticking … dev has thrown off his shirt, and thom is careening into feedback, and i am behind them. i am the generator … it’s a small room, and we’re a big noise, and i am the nonqueer bassist in a queercore band who is filling the room with undertone as dev screams … dev is wailing now, and thom is crashing, and even though my feet don’t move i am traveling hard … i throw the chords at them. i drench them in the soundwaves. i am making time so loud that they have to hear it. i am stronger than words, and i am bigger than the box i’m in, and then i see her in the crowd, and i fall apart … here she is, and my fingers are losing their place, and my buzz is losing its edge, and everything around me goes from crying out to just plain crying.

she sees me. she can’t fake surprise at seeing me here, because of course she fucking knew i’d be here. so she does a little smile thing and whispers something to the new model, and i can tell just from her expression that after they get their now-being-poured drinks they are going to come over and say hello and good show and — could she be so stupid and cruel? — how are you doing? and i can’t stand the thought of it. i see it all unfolding, and i know i have to do something — anything — to stop it.

so i, this random bassist in an average queercore band, turn to this girl in flannel whom i don’t even know and say:

‘i know this is going to sound strange, but would you mind being my girlfriend for the next five minutes?’

there are certain things a girl just knows, like that a fourth minute on a punk song is a bad, bad idea, or that no way does a jersey-boy bassist with astor place hair who wears torn-up, bleach-stained black jeans and a faded black t-shirt with orange lettering that says when i say jesus, you say christ swing down boy-boy alley; he’s working the ironic punk boy-johnny cash angle too hard to be a ‘mo … just because he doesn’t look like a whitesnake-relic-reject like all of your band does not automatically mean the guy’s gay.

the incidental fact of his straightness doesn’t mean i want to be nomo’s five-minute girlfriend, like i’m some seven-eleven quick stop on his slut train. only because i am the one loser here who hadn’t lost all her senses to beer, dope or hormones do i have the sense to hold back my original instinct — to yell back ‘fuck no’ in response to nomo’s question.

nomo is standing in front of me, blocking my view, waiting to find out if i want to be his five-minute girlfriend and looking like that lost animal who goes around asking ‘are you my mother’ in that kid book.

from behind him i don’t see caroline, but i do see that stupid bitch, tris … that bitch should not be in a club like this. as if her language is not enough indication, there is also the matter of her hot topic mallrat outfit: short black leather skirt with buckles up the side, mass-produced ‘vintage’ ramones t-shirt and piss-yellow leggings with some horrible pair of pink patent-leather shoes. she looks like a neon sign bumble-bee by way of early debbie harry rip-off.

i’m the less-than-five minute girlfriend who for one too-brief kiss fantasized about ditching this joint with him, going all the way punk with him at a fucking jazz club in the village or something. maybe i would have treated him to borscht at veselka at five in the morning. maybe i would’ve walked along battery park with him at sunrise … but no, he’s the type with a complex for the tris type: the big tits, the dumb giggle, the blowhard. literally.

i extract my wrist from his grip. but for some reason, instead of walking away, i pause for a moment and return my hand to his face, caressing his cheek, drawing light circles on his jaw with my index finger.