my true love gave to me: twelve holiday stories 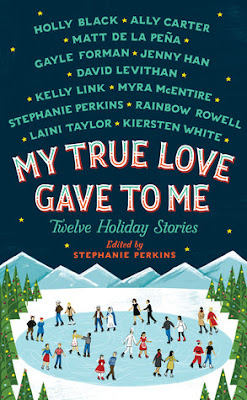 why i wanted to read it: hello. rainbow rowell. duh. yall should know i’ll read pretty much anything that’s got her name on it. also it’s a selection for erin’s book challenge.

what i liked: from rowell’s midnights:

noel swung his head around and made eye contact with mags. he raised his eyebrows hopefully; his eyes went all soft and possible. it was definitely a face that said, hey. is it okay if i kiss you?

noel snapped out of it — and made a face that said, well, duh. “of course it’s good. i’ve kissed girls before” (page 6).

“they’re playing our song,” he said.

“what are we doing?” mags asked.

from jenny han’s polaris is where you’ll find me:

it’s snowing, of course. there’s always snow on the ground here. it makes everything look diamond dusted. the thing about snow is, it’s very quiet. the air is hushed. it’s like church.

living where i live, it can sometimes be hard to tell the difference between magic and make believe (page 98).

from david levithan’s your temporary santa:

when i was a kid, i didn’t understand that santa’s elves weren’t the kind from storybooks. i thought his toy shop was staffed with fauns and boggarts, sprites and trolls, goblins and pixies. before mom left, when i made lists to give to santa, they were always full of magical things. i wanted a cloak that could make me fly. i wanted a tiny doll, no bigger than my finger and as perfectly jointed as a living person. after mom left, i wanted crystal balls with which to scrye my mother and magical chalk that could draw me a doorway to her, and a magical potion i could make her drink that would make her care about us (pages 130-131).

our first christmas together, anne sewed me a tiny doll with jointed cloth limbs and thin embroidery floss for hair. i guess dad told her about my old christmas lists.

i didn’t let her know, but i’d teared up when i saw the doll. i was too old for it, but i didn’t care. i carried her around in my purse, until she got too sticky with jolly ranchers and marked up by pens that i had to retire her to a bookshelf in my room (page 159).

“we brought gifts,” the boy… said, and the blond reached into his coat and brought out a bottle of clear liquor. he removed the cork with his teeth. “mine is holiday cheer” (page 169).

that was the moment i decided that since magic was real… since i’d made this party out of two hundred bucks and sheer determination, then maybe i was wrong about the things i thought i couldn’t have, that weren’t for me. maybe it was okay to imagine greater things. maybe it was all for me, if i wanted it (page 175).

from gayle forman’s what the hell have you done, sophie roth?:

“i asked about you, after the class… but i never spotted you for more than a blur. until tonight… i was debating saying something. you were looking pretty fierce, not fit for company… but then you mentioned ned flanders, and i had to say something” (pages 195-196).

what if the mistake wasn’t coming here, but being blind to any of that?

what the hell have you done, sophie roth? she thought to herself for the umpteenth time. but it felt different now (page 199).

shame leads to secrets, and secrets lead to lies, and lies ruin everything. especially friendships. no kid wants to explain that his mom can’t bring snacks to class because she ran out of xanax before the pharmacy would refill the prescription. other parents stop inviting you to birthday parties, because you don’t reciprocate. no one asks you to join sports teams, because you never meet the registration deadlines, and if you do, no one ever remembers to pay your league fees. soon enough, people forget you altogether.

the story by stephanie perkins called it’s a yuletide miracle, charlie brown. that one and the first one by rowell — noel and mags are amazing — are my favorites. welcome to christmas, ca by kiersten white’s alright.

what sucked: the last two stories. that even though i marked pages of others because i liked what was written, i didn’t love the stories so much.