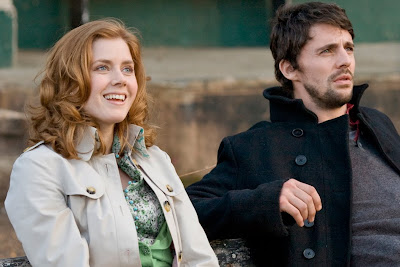 one of my favorite children’s books is little quack, about a duckling who’s too afraid to leave the nest to go swimming with his mother and siblings. actually, all the ducklings are afraid, but one by one, the mama coaxes them out of the nest and into the water. eventually little quack succeeds in leaving the nest, as well. what i like the best about it is the illustrations. the face and gestures little quack makes as his mama attempts to cajole him into leaving that nest are really too cute. he’s so cute, in fact, that the store for which i work has created gift cards with his image on it. and whenever i feel like not nickel and diming my debit card with cafe purchases, i buy one of those gift cards.

the duck was my college mascot, after all.
i went to see leap year tonight. i liked it a lot. not because it’s this fantastic story (because it isn’t) and not because it’s all that funny (because it isn’t), but because i dig matthew goode’s character and i am in love with britain’s countryside.
i’ve friends who live there. friends who’ve lived there. they hate it.
i should listen to them when they bitch about it. hell, i’ve been there. it’s horribly, horribly inconvenient. the difficulties amy adams’ character has? they aren’t that much of an exaggeration.
i almost got arrested in cardiff’s airport by a customs officer when i arrived. the lady at the train station didn’t ask me which way i’d like to get to hay-on-wye, and because she didn’t ask, i was practically dumped off in the middle of nowhere. heads up, boys and girls. if you ever go to wales, builth road isn’t a station. there i was, standing on a platform, staring at endless trees to my right and left and a handful of windows opened on the second floor of the building in front of me. residences, folks. and when you yell at the windows, no one answers. i had to knock on doors. i had to pay a stranger, some guy who, thankfully, wasn’t a serial killer or rapist, twenty pounds to give me a ride. had the lady at the cardiff train station asked, i could’ve taken the train to hereford instead and caught a bus that would’ve deposited me two blocks from my bed and breakfast. of course, i got there on a sunday. maybe that had something to do with it.
it’s not an easy country. but is there such a thing?
it’s glorious and lush and simple and peaceful.
the villages’ businesses close at five o’clock. every night. the only things open after that are the pubs and restaurants. it’s quiet and charming and old school. and i dig it.
i drove home through the flat and ever increasingly coldly concrete landscape of what once was a fairly small town surrounded by dense forests of pine trees in every direction…
i so want to get out of here.
and it’s not that i’m too afraid to leave the physical nest. i’ve left it before. and every time i leave it, i get a little better at having done so.
that scene from five hundred days of summer? the one where it shows his expectations on one side and his reality on the other?
i feel like my persona’s split somehow. not in a schizophrenic sort of way, but in a…
in a bipolar sort of way.
in certain situations, i could approach anyone and ask him or her anything at all. that tricky question that you’re too afraid to ask, because you feel like it’s too rude to ask it, but you really need to know the answer? let me.
but in others, i can’t say jack shit.
i’ve probably written about this before, too.
this is what happens when you’re me, though. the damned thoughts keep circling, like vultures.
i wish i could be ballsy all the time. god knows the world would like me much better for it.
i would like me much better.
amy adams’ character stages apartments and homes for a living. this means that she goes in to a property that’s available for purchase and fixes it up just so, so the people viewing the property would feel compelled to purchase/lease/rent it.
but i imagine one would have to have an interior design degree for that, and i have no depth perception, thereby having lousy spatial recognition skills. pair that with the rather sizable chunk of change i owe in college loans (i tried to boost my grade point average so that i could get into graduate school, but that didn’t go so well…all kinds of good things came from that experience, though, so i’m not too disappointed) and the credit score of a financially irresponsible chick and you get? bad idea.
i can talk myself out of anything.
i don’t know who taught me that, if it was my peers or my parents.
but i learned at a very early age to be practical. i don’t always appear to have learned the lesson, but the reasonable person doesn’t shuck everything and move to colorado or california or the celtic lands without a plan. and you can’t just jump in.
there’s a reason there’s a shallow end.
it’s not realistic to shoot for the fences. only the beautiful people manage to hit them.
look at all the damage in my noggin.
i want a life so very different from the one i have. not a glamourous life, but an eventful one. more an exciting one.
because inside of me is a woman so very different from the one most people see.
on the rare occasion i think i could make it out of the mental nest to swim freely in those waters and live the life i imagine, all i have to do is look in the mirror.

One response to “leap already”