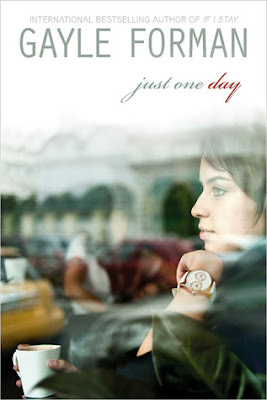 why i wanted to read it: i like the cover. and it’s sort of strategically placed, so that i would pass by it on pretty much every visit to the bookstore. i picked it up a couple of times, but i never felt compelled to keep it. and then, the other day, i saw it again and decided what the hell.

what i liked: “oh, so you’re saying that i’m an accident?”

“i think that might possibly be one of the most flattering things anyone’s ever said to me.” i pause. “i’m not sure what that says about me, though.”

i feel like the whole day has been an electrical shock, paddles straight to my heart, bringing me out of a lifelong torpor i hadn’t even known i was in (p. 126).

but still, that whole day, being with willem, being lulu, it made me realize that all my life i’ve been living in a small, square room with no windows and no doors. and i was fine. i was happy, even. i thought. then someone came along and showed me there was a door in the room (p. 179).

he looks at me, and then, reverting to the voice he’d used with kendra, says, “if homegirls wanna see me as ghetto trash–” he stops and switches to his lispy, sassy voice– “or big-ass queer–” now he switches to his deepest shakespeare voice– “i shall not take it upon myself to disabuse them” (p. 210).

and the people we pretend at, they’re already in us. that’s why we pretend them in the first place (p. 237).

i am helpless. i am a void. a disappointment. my helplessness, my dependency, my passivity, i feel it whorling into a fiery little ball, and i harness that ball, somehow wondering how something made of weakness can feel so strong. but the ball grows hotter, so hot, the only thing i can do with it is hurl it (p. 255).

that day with willem, i may have pretended to be someone named lulu, but i had never been more honest in my life (p. 256).

what sucked: i haven’t decided how i feel about the ending. it’s a little too unreal for my tastes, but at the same time, there’s a second book scheduled for release in october, and i’m curious to read it. still… there’s a whole lot of suspension of disbelief here. and i typically reserve that for the works of science fiction. then again, it’s (yet another) teen fiction novel, so perhaps i should go a little easy on it…

having said all that: i liked it well enough. had a hard time putting it down. it’s a quick read. light. fun. and for all it’s improbability, there are certainly scenes that ring true.

5 responses to “just one day”

Leave a Reply to Kate @ Another Clean Slate Cancel reply