just one damned thing after another 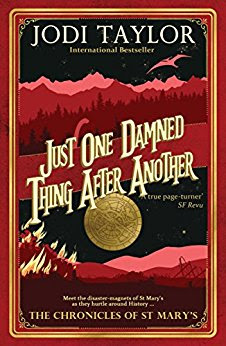 why i wanted to read it: because the selections i’d previously considered for the time travel category of the bonus round in the spring session of erin’s book challenge (which has concluded, but i’d resolved to read them all anyway, and so i am. the next one starts in july, yall. she’ll post the categories in like three weeks) were not things i could read (time between us by tamara ireland stone and the rose garden by susan kearsley — i was a fourth of the way through the first when i found myself making fun of it and a hundred pages into the second when i realized it was fan fiction, which is not my thing). so i asked a friend for recommendations about books that deal with time travel, which is also not my thing, and she suggested this one.

what i liked: i listened to this on sunday as i trekked to lake charles and back and was grateful for the distraction. it was, for the most part, engaging and entertaining. i liked the characters. i liked that time was more crucial to the telling of the story. this isn’t a book that shows characters at different ages in their lives, like the time traveler’s wife, or how a character’s life would be different where she to change one circumstance, like life after life. it’s characters who become historians and travel through time for research. and then there’s a bad guy who wants to go back in time and profit from it, and they have to stop him.

what sucked: it is just one damned thing after another, and maybe it’s one thing too many because my interest in the story waned in the back half and never really recovered. also it’s book one of eight, i think, in a series. and maybe i like the writing and the characters well enough, but i’m not inclined to read seven other stories (or however many i’d need to read) to learn the resolution of one of the conflicts the author established in this book. i’m all for stories that revolve around particular characters. some of my favorite books are parts of trilogies or series. harry potter, for example. here’s the thing: you have to resolve all the conflicts you establish in the body of the book in that book. it has to be able to stand alone. and this one can’t. not all of them. there’s one pretty important detail that isn’t revealed, and i’m annoyed that it wasn’t.

having said that: it’s not bad. i liked the main character. she’s pretty cool. but enough to inspire me to read more.