it damned sure ain’t me, so it must be you

this morning i awoke to a text from that man i’ve been seeing… and it started out sweet. but that conversation, which ended up spanning a four hour period, ended quite sourly.

so we won’t be shopping at victoria’s secret for those scraps of silk and lace after all.

we won’t be doing anything at all. fine by me. i’d given that dude the benefit of the doubt one too many times.

in the end, what cut it was that he’d said i was the ugliest bitch he’d ever dated. this from a man who claimed to love me. you keep using that word…

thank god for my friend melissa. one of the first things she’d done after i’d told her of the demise was to send me this… 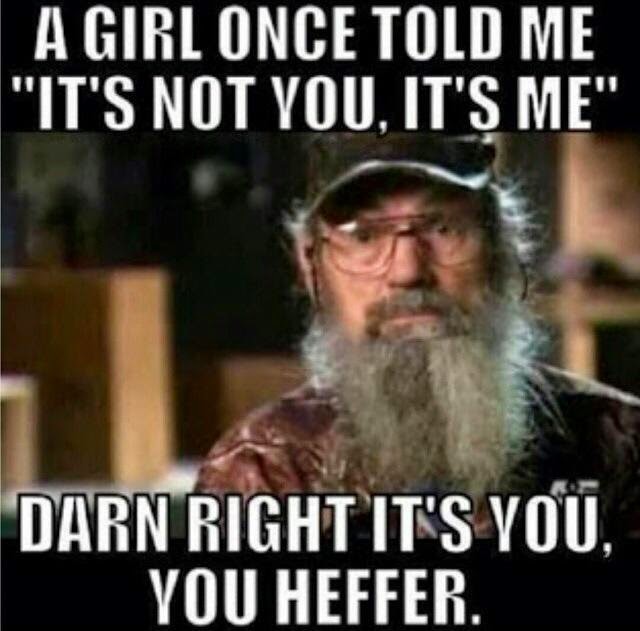 … paired with the words he’s the heffer. darn right. (and i didn’t even care that the world was spelled wrong.)

thank god for the apple store and the ease with which one can exchange a phone.

it’s a damned good thing i am capable of loving myself to some extent. there’re way too many women who tie themselves to a man just because he’s there. just because sometimes he’s good to you. just because he does shit like insisting on getting the door for you.

being a man takes a hell of a lot more than opening a door for a lady.

and cutting a tie’s really not so hard. i’d much rather die a single woman than date a douchebag.

so the next time my gut says that dude’s probably an angry dick, i will go with that instead of giving him the benefit of the doubt.

2 responses to “it damned sure ain’t me, so it must be you”