gone with the wind 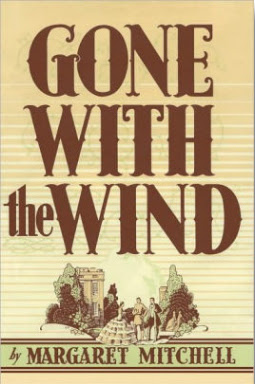 why i wanted to read it: it’s my mother’s favorite book.

what i liked: there’s a lot, yall. a LOT. it would take me days to type up all the things, so i’ll just share a few specifics.

“that’s no way to handle men, my dear. you are forgetting your early training.”

“i don’t need you to tell me how to behave,” she said and wearily put on her bonnet. she wondered how he could jest so blithely with a rope around his neck and her pitiful circumstances before him. she did not even notice that his hands were jammed in his pockets in hard fists as if he were straining against his own impotence.

“cheer up,” he said, as she tied her bonnet strings. “you can come to my hanging and it will make you feel lots better. it’ll even up all your old scores with me — even this one. and i’ll mention you in my will.”

“thank you, but they may not hang you till it’s too late to pay the taxes,” she said with a sudden malice that matched his own, and she meant it (page 587).

“so all i can say is, keep that pistol of yours handy — and when i’m in town, i’ll try to be on hand to drive you.”

“yes, my dear, it is my much advertised chivalry that makes me protect you.” the mocking light began to dance in his black eyes and all signs of earnestness fled from his face. “and why? because of my deep love for you, mrs. kennedy. yes, i have silently hungered and thirsted for you and worshiped you from afar; but being an honorable man, like mr. ashley wilkes, i have concealed it from you. you are, alas, frank’s wife and honor has forbidden my telling this to you. but even as mr. wilkes’ honor cracks occasionally, so mine is cracking now and i reveal my secret passion and my –“

“oh, for god’s sake, hush!” interrupted scarlett, annoyed as usual… “what was the other thing you wanted to tell me?”

“what! you change the subject when i am baring a loving but lacerated heart?” (page 684).

“really, scarlett, i can’t go all my life, waiting to catch you between husbands” (page 832).

“did you ever in your novel reading come across the old situation of the disinterested wife falling in love with her own husband?”

“you know i don’t read novels,” she said and, trying to equal his jesting mood, went on: “besides, you once said it was the height of bad form for husbands and wives to love each other.”

strange, what a pang it had been even in her pain, to know that she would not have this child. stranger still that it should have been the first child she really wanted…

rage had been swallowed up in pain and she wanted rhett. but he was not there and she could not bring herself to ask for him.

her last memory of him was how he looked as he picked her up in the dark hall at the bottom of the steps, his face white and wiped clean of all save hideous fear, his voice hoarsely calling for mammy…

whenever scarlett opened her eyes, she said, “melly?” and the voice answered. and usually she started to whisper: “rhett — i want rhett” and remembered as if from a dream that rhett didn’t want her… she wanted him and he didn’t want her.

once she said “melly?” and mammy’s voice said: “s’me, chile,” and put a cold rag on her head and she cried fretfully: “melly — melanie” over and over but for a long time melanie did not come. for melanie was sitting on the edge of rhett’s bed and rhett, drunk and sobbing, was sprawled on the floor, crying, his head in her lap…

“i’ve killed scarlett, i’ve killed her. you don’t understand. she didn’t want this baby and –“

“you must hush! you are beside yourself! not want a baby? why every woman wants –“

behind that door, melanie was going and, with her, the strength upon which she had relied unknowingly for so many years. why, oh, why, had she not realized before this how much she loved and needed melanie? but who would have thought of small plain melanie as a tower of strength? melanie who was shy to tears before strangers… scarlett felt her courage and self-confidence ooze from her as she realized that the sword which had flashed between her and the world was sheathed forever (page 1012).

“you are tired,” he said, still watching her. “you’d better go to bed.”

“my pet, it’s written plainly on your face. something, someone has made you realize that the unfortunate mr. wilkes is too large a mouthful of dead sea fruit for even you to chew. and that same something has suddenly set my charms before you in a new and attractive light,” he sighed slightly. “and it’s no use to talk about it” (page 1027).

what sucked: that it’s more than ONE. THOUSAND. PAGES. holy CHRIST. mitchell must have been BORED OUT OF MIND to write that much. also, i question whether the editor was in his or her right mind prior to press, letting that book fly with that many pages. the hardcover’s as heavy as a doorstop. it’s more a history text book than a novel. at least until you get to the eight hundredth page or so.

i borrowed the audio book from the library. it’s TWO BOXES of cds. there are FORTY-ONE discs.

having said that: i don’t think i’ve ever bitched at a character more than i did at scarlett while reading this. jesus, she’s a STUPID girl. i cried listening to this one, though, and in the handful of times i’ve seen the movie, i’ve never cried for her or for rhett. and there’s so much sorrow in scarlett’s heart in the last of this thing that the film just can’t capture. also, ain’t no way in hell scarlett gets rhett back. this is one hell of a tragedy. mitchell sure knew how to pile on the damage.