forty in forty: the first

one. sometime’s crying’s a really good thing. it gets results. like when i was a baby and my hips were fucking with me. i cried. a lot. and eventually, the doctors figured out why and fixed it.

two. some doctors actually give a shit about their patients. find a good one. and cling. so what if he’s not in your network. he’s good to you.

four. it’s okay to move around in life. sure, you’ll miss people. but you’ll meet people, too. and maybe in moving, the ones you’ll meet will be the ones who can help you when the world’s more turbulent.

five. those play carpets on the kindergarten room floor (do they even make those anymore? because all i remember of my kindergarten class is my teacher and the hopscotch blocks on the carpet). anyway. it can’t all be fun and games. it shouldn’t be. (but oh, this room looks fun.)

six. it’s great to have girlfriends. never, NEVER take them for granted.

seven. so you can’t hit a ball very well. or throw it. big deal. you can run really fast. and maybe they won’t pick you first for dodgeball. but cat and mouse… that’s a different game entirely.

eight. boys ARE stupid. but don’t throw rocks at them.

nine. never be ashamed to share your talent. yeah, they’re all staring at you. and yeah, they may laugh at you if you screw it up. but there’s that small chance of success. and maybe you’ll surprise them instead.

ten. the number of people who do or don’t come to see you while you’re in the hospital… this shouldn’t mean much. numbers have a way of lying. it’s not how many people care for you. it’s how they care.

eleven. there are too many teachers out there who can’t be bothered to teach. don’t be one of them. don’t let one of them negatively influence your self-worth.

thirteen. sometimes a fresh box of crayons and a new coloring book are the best remedy. 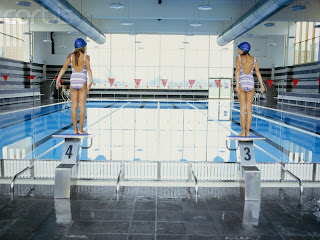 fourteen. size matters not. it doesn’t. like when you’re standing on the blocks and the girls to your right and left are taller and more muscular. maybe they’ll win. maybe. but it’s passion that gets you through the water. and anger? sometimes she’s the best motivator.

fifteen. brothers can also be a HUGE nuisance. punch them if you need to. like when one’s charging up a flight of stairs, red-faced and sobbing from anguish (admittedly because you hit him where you shouldn’t have). by all means, aim the heel of that boot at his forehead. don’t worry about the grandfather clock your great uncle constructed from scratch that’s on the landing. it’ll be alright. boundaries have to be set. firmly.

sixteen. don’t let a boy get his hands on you unless you really crave the boy, the touch. not because you need to be touched. but because you want to be.

seventeen. if you want something, don’t wait around for someone to give it to you. go get it.

nineteen. sure, reading’s important. but so are your studies. your professors assign a text because something about it has merit. be curious; find out what it is.

twenty. people will be wrong about you. you will know it in your gut. do your best to prove them wrong. don’t give in. don’t assume because you can’t accomplish a task quickly enough, because you haven’t succeeded yet that they are right. they aren’t.

i linked this post to mattie at northwest native for weekly lessons.

3 responses to “forty in forty: the first”