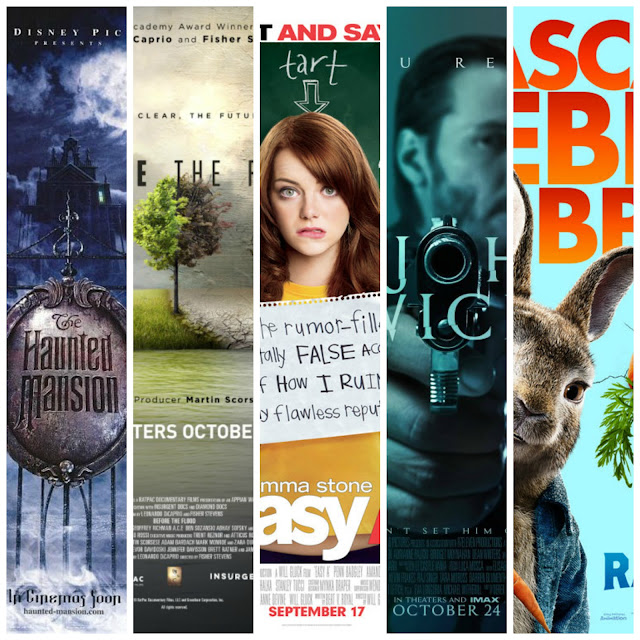 one. haunted mansion. this was not a film i’d selected. i’d spent an evening with my younger brother, his children, his wife, her sister and niece. we had an outdoor movie night, swimming and soaking in a hot tub. the ghosts make this movie. eddie murphy does NOT.
family night at my brother’s house… it was this or or hocus pocus, and i’d already seen the latter, so… i voted for this one. i think i would’ve preferred to watch hocus pocus again. it wasn’t awful. but it wasn’t awesome, either. the kids enjoyed it. terence stamp starred in valkyrie with tom cruise who starred with bacon in a few good men.
two. before the flood. watched this one to learn about some work i’m doing. it’s interesting enough.
NOT because i wanted to so much as i needed to for a job i’m doing. i can’t STAND leonardo dicrapio. he was in the departed with jack nicholson who starred in a few good men with tom cruise.
three. easy a. i love emma stone, and she’s her typical, cute self here. it’s an interesting story, and i enjoyed it. it can be pretty ridiculous at times, but then almost immediately following the silly, there comes a scene that is really sweet. i like it. i’d watch it again. it’s the only movie of the five mentioned here about which i can say that.
i liked it. there are some spots that are utterly ridiculous, but almost immediately after those would be something that was pretty cute or clever. emma stone starred with bacon in crazy stupid love.
four. john wick. i do love keanu reeves and ian mcshane. this movie is all special effects and gratuitous violence for the sake of those things. not a fan.
i thought the story was stupid, the film another excuse for special effects and techno music. the only good thing about it was ian mcshane and willem dafoe. i’d planned on watching the sequel. that’s not happening now. keanu reeves starred in something’s gotta give with jack nicholson who starred with bacon in a few good men.
five. peter rabbit. another flick the kids picked. i was really glad when it was over.

yall, this movie was SO, SO stupid. the only good thing i can say about it is that the end comes quickly. connection: rose byrne starred with bacon in x-men: first class.

and that makes twenty-five for me!
i’m hoping to complete the bonus round, as well. still tweaking my list.
latecomers to the fall film challenge are welcome!