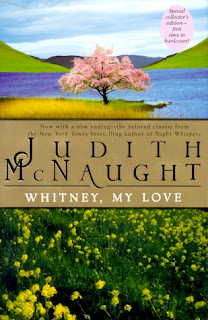 oh, i do so like it when an author pairs up two incredibly headstrong folks, as judith mcnaught does in pretty much all of her novels. the best example of this is whitney, my love.

i know. it’s a lame title. and it’s typical smut. but i think you’re gonna like these two.

‘he doesn’t care about the money, but he hates to admit he lost. he’s never learned how to accept defeat.’

clayton laid down his knife and fork, preparing to give stephen the brutal setdown he’d earned hours before, but whitney, taking stephen’s cue, immediately drew off clayton’s fire. ‘how strange you should say that,’ she said to stephen, looking genuinely amazed. ‘i have found that your brother accepts defeat without even putting up the slightest struggle. why, faced with the tiniest discouragement, he simply gives up and–‘

clayton’s open hand slammed down on the table with a crash that made the dishes dance. he surged to his feet, a muscle leaping furiously along the taut line of his jaw. ‘miss stone and i have something to say to each other which is best said in private.’ he gritted out the words, flinging his napkin down on the table and jerked whitney’s chair back. ‘get up!’ he snapped in a low, terrible voice when whitney remained frozen in her seat. his hand clamped down painfully on her forearm, and whitney rose unsteadily …

clayton hauled her halfway across the room, which was lined with books, recessed behind richly carved arches of polished oak, then flung her arm away and stalked to the fireplace. turning, he regarded her with a look of undiluted loathing, while he visibly strove to bring his rampaging temper under control. suddenly his voice slashed through the silence. ‘you have exactly two minutes to explain the purpose of this unexpected and unwelcome visit of yours. at the end of that time, i will escort you to your carriage and make your excuses to my mother and brother.’

whitney drew a tortured breath, knowing that if he saw her fear now he would use it against her. ‘the purpose of my visit?’ she said in a small, distracted voice, her mind frantically counting off the passing seconds. ‘i — i would have thought by now it was obvious.’

‘it is not obvious!’

‘i’ve come to — to explain why i said what i did to you at the banquet. you see,’ she said, stammering in her haste to finish in the minutes he’d allotted her, ‘earlier at the church, i thought we — you and i — still had an agreement, and–‘

clayton’s eyes raked contemptuously over her. ‘we have no agreement,’ he said scathingly. ‘it’s over. done with. it should never have begun! the betrothal was an insane idea, and i curse the day i thought of it.’

sick with failure and defeat, whitney dug her nails into the flesh of her palms and shook her head in denial. ‘it never had a chance to begin because i wouldn’t let it.’

‘your two minutes are almost up.’

‘clayton, please listen to me!’ she cried desperately. ‘you — you told me a long time ago that you wanted me to come to you willingly, that you didn’t want a cold, unwilling wife.’

‘and?’ he demanded furiously.

whitney’s voice shook. ‘and i am here. willingly.’