i’ve been dreading this post. mostly because i had to run through my list to see just how many stories i could include by this one author and it turns out i can only do one or two depending on whether i include a work by another author.

and because the next two (or three) authors’ works are classified as romance novels rather than chick lit, i’m a little wary of including them.

but only a little.

because i love them.

i’ve loved them longer than almost every book i’ve read, save for the love i have for thomas harris’ silence of the lambs and red dragon. i know. odd, right? that i would mention his works and follow that up with nora roberts’ stuff.

that i would love anything so grotesque and grim, really, is bizarre considering i can’t even stomach the thought of listening to michael jackson’s thriller or watching the monster squad (a film in which a young boy and his friends take on dracula, frankenstein, wolfman and a bunch of other heebie jeebies). a kiddie flick scares me, okay? that’s how much of a sissy i am.

it’s been a while since she’s written anything i’ve loved. but back in the day, when i should’ve been reading faulkner, fitzgerald, hemingway, shakespeare and steinbeck, i was reading smut. voraciously. and usually it was written by her.

back in the day, she was a pretty good storyteller.

so picking one (and it will be one … i’ve decided) of her stories which i like better than all the others is kind of a feat.

but because it’s my blog, and therefore the rules can be bent a little, i’m going to cheat and do a trilogy. hah! because technically, it can be purchased in one volume. (so really, the cheating’s not so bad.) 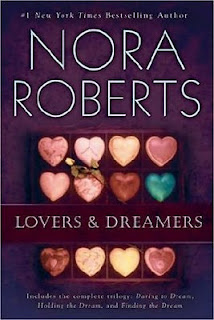 it’s about margo, kate and laura and their boys, joshua, byron and michael.

since three snippets would make this a hella long post and since of those three couples’ tales, kate and byron’s story is my favorite, you get a bit from the second story, holding the dream.

‘something wrong with your lunch?’

she glanced over, and the hand she had pressed protectively against her stomach fisted as byron slide into the chair that tydings had vacated. ‘are you on dining room detail? i thought the brass stayed up in the lofty regions of the penthouse.’

‘oh, we mingle with the lower floors occasionally.’ he signaled to a waitress. he’d been watching kate for ten minutes. she had sat completely still, staring out of the window, her meal untouched, her eyes dark and miserable. ‘the chicken bisque,’ he ordered. ‘two.’

‘i don’t want anything.’

‘i hate to eat alone,’ he said smoothly, as the waitress cleared the dishes. ‘you can always play with it like you did your salad. if you’re not feeling well, the bisque should perk you up.’

‘i’m fine. i had a business lunch.’ under the table she pleated her napkin in her lap. she wasn’t ready to get up, wasn’t sure her legs were strong enough. ‘who eats at business lunches?’

‘everyone.’ leaning forward, he poured two glasses of mineral water. ‘you look unhappy.’

‘i’ve a client with an imbalance of passive income. that always makes me unhappy. what do you want, de witt?’

‘a bowl of soup, a little conversation. you know, i developed this hobby of conversation as a child. i’ve never been able to break it … i’ve noticed you often have a bit of trouble in that area. i’d be happy to help you, as i’m sort of a buff.’

‘there you are. i do … i also have a habit of eating,’ he continued. ‘if you need help along those lines, i can tell you that you start by dipping your spoon into the soup.’

‘think of it as medicine. it might put some color back into your cheeks. you not only look unhappy, kate, you look tired, beaten down and closing in on ill.’

hoping it would shut him up, she spooned up some soup. ‘boy, now i’m all perked up. it’s a miracle.’

when he only smiled at her, she sighed. why did he have to sit there, acting so damn nice and making her feel like sludge?

‘was your business meeting difficult?’

‘yes, as a matter of fact.’ because it was soothing, she sampled the bisque again. ‘i’ll deal with it.’

‘why don’t you tell me what you do when you’re not dealing with difficult business problems.’

the headache at the edges of her consciousness wasn’t backing off, but it wasn’t creeping closer. ‘i deal with simple business problems.’

‘and when you’re not dealing with business?’

she studied him narrowly, the mild, polite eyes, the easy smile. ‘you are coming on to me.’

‘no, i’m considering coming on to you, which is entirely different. that’s why we’re having a basic conversation over a bowl of soup.’ his smile widened, flirted. ‘it also gives you equal opportunity to consider whether or not you’d like to come on to me.’

her lips twitched before she could stop them. ‘i do appreciate a man who believes in gender equality.’ she also had to appreciate that for a few minutes he’d taken her mind off her troubles. that he knew it, yet didn’t push the point.

‘i think i’m beginning to like you, kate. you are, i believe, an acquired taste, and i’ve always enjoyed odd flavors.’

‘wow. that’s quite a statement. my heart’s going pitty-pat.’

One response to “byron and kate”