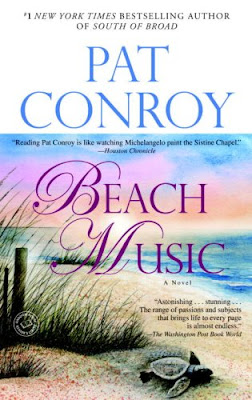 why i wanted to read it: i was supposed to read it earlier this year (or maybe late last year?) for a book club i’m in but didn’t. i needed a book that began with b for erin’s book challenge. i felt guilty for not having read it then, and my mom said she and dad had run out of gas listening to this story, they’d been so absorbed. i figured i should give it a shot.

what i liked: she had always prided herself in keeping her madness invisible and at bay; and when she could no longer fend off the voices that grew inside her, their evil set to a chaos in a minor key, her breakdown enfolded upon her, like a tarpaulin pulled across that part of her brain where once there had been light (page 3).

“i guess you think i should hire a marching band to welcome you back,” my father, judge johnson hagood mccall, said to me.

“don’t look at me that way,” my father ordered. “i refuse to accept your pity.”

“hi, jack,” my father said, mugging, his words soft around the edges. “great to have you back, jack. thanks for not calling, jack. for not keeping in touch.”

“i tried to call you a couple of times, dad,” i said. “but it’s hard talking to a man after he’s passed out.”

“are you implying that i have a drinking problem?” the judge said, rising up to his full length, his head thrown back.

dallas said, “like saying noah had a problem with the weather, pop.”

“drink some coffee,” dupree offered. “sober up before you go see mom.”

my father looked at me, then sat down on a chair, falling the last several inches.

“you heard that your mother deserted me for a much younger man, i suppose,” he said to me.

“there’s no need for your editorial comments, dallas,” the judge said. “i am merely stating the facts. his money blinded her. your mother always had a weakness for material things and ill-gotten pelf.”

“that’s why you’re only a public school teacher in the state that ranks last educationally in this great nation,” the judge said. “they allow you to teach other idiots, i am told.”

“aren’t you glad dad’s drinking again?” dupree asked me, trying to divert our attention away from tee. “i never feel closer to the old boy than when he’s going through delirium tremens.”

“i have an inner-ear infection,” the judge insisted. “the medicine affects my sense of balance.”

“that infection must be hell,” tee said. “it’s been around for thirty years or more.”

“all of you were in league with your mother against me,” said the judge, closing his eyes.

“thanks for that timely bulletin, bro,” tee said. “and get ready for a full-contact scrimmage. john hardin’s tying up his boat down at the dock.

“worse than it used to be?” i asked dupree.

“still a bit off,” dupree said. “but he’s become a little dangerous. he spooks easily.”

“now, for the enjoyment of our live audience, ladies and gentlemen, we present madness,” dallas said.

dupree said, “let’s go together to get your shot,”

john hardin’s eyes blazed as he spoke. “i hate you the most, dupree. you’re number one on my list. then comes jack. precious jack, the firstborn son who thinks he was born in a manger. then comes dallas, who think he’s some kind of genius when he actually doesn’t know shit…”

“i’ll go with you,” tee said to john hardin. “you and i’ll go with dupree to get that shot.”

“the only cure that’d help me at all is for everyone in this room to get cancer and for my sweet mother to walk out of here with me.”

dupree rose and approached his brother cautiously. “please, john hardin. we know how this ends. you’ll get disoriented and do something stupid. you won’t even mean to do it or know you’re doing it. but it’s in your hands. get a shot or the cops’ll put out a bulletin to pick you up.”

“if i needed a fortune-teller, asshole, i’d go order a chinese meal,” john hardin screamed… “i’m the nicest of the brothers,” john hardin said. “mom said that, not me. i’m just reporting the facts. she said i was her favorite. the pick of the litter” (page 137).

“he’s fine. i just told your mother. i saw him at the house this morning. he looked like a million bucks. all he wanted was to borrow a gun.”

dupree lowered the binoculars and looked at our father with a baleful gaze… “jesus, i see john hardin. he’s holding something. yeah. congratulations, dad. it’s your gun.”

“you lent a gun to a paranoid schizophrenic?” dallas said.

“no, i lent one to john hardin,” the judge said. “the boy told me he wanted to do a little target shooting…”

“hey. waterford,” john hardin was screaming. “fuck you. that’s what i think of the town and everyone who lives in it. what a rotten little excuse for a town. everyone who grows up here, or is forced to live here even for a small amount of time, becomes a complete, worthless asshole. it’s not your fault, waterford. you can’t help it that you’re rotten to the core. but it’s time. you’re just not worth a shit and it shows.”

“makes you proud to be a mccall,” dallas whispered…

“i know what you’re saying, dupree,” he shouted. “you’re telling everyone i need my shot and then i’ll settle down… i’m never letting another car cross this goddamn bridge. fuck you, waterford…”

dupree stepped forward, the one who loved john hardin the best and the one john hardin hated the most.

“eat a big hairy one, dupree,” john hardin answered, using his middle finger to give his words fuller effect. “this town is so shitty it gave my poor mother leukemia… that’s my brother dupree,” john hardin screamed from his island of steel. “if they had a contest to find the biggest asshole in the world, i guarantee he’d be a finalist…”

“i never understood why you lived in europe,” dallas said, “till this very moment.”

“what a loser,” dupree screamed back at john hardin. “you’ve been a loser and a phony since the day you were born. mama just told me that. she’s out of her coma.”

“organize the cheer, brothers,” dupree said. “he means it. and if the swat team gets here, they’ll kill our brother. they don’t play.”

“now close the bridge,” dupree shouted. “before i come over there and whip your ass.

“there are ladies present on the bridge,” dallas said, changing tactics.

“i apologize to all the ladies i might’ve offended,” john hardin said, and there was true contrition in his voice. “but my mother has leukemia and i’m really not myself today.”

“mama’s out of the coma,” dupree shouted again. “she wants to talk to you. she won’t see the rest of us until she talks to you. close the bridge.”

“i will under one condition,” john hardin said… “i want all of my brothers to get stark, buck naked and jump into the river…”

dupree stepped out of his underwear, followed by tee, then me, and finally a very reluctant and grumbling dallas.

john hardin grinned happily as he savoured the sight of us, his naked and humiliated brothers. “all of you’ve got little dicks” (pages 244-247).

i listened to this one on audio, too (because it’s seven hundred sixty-eight pages, and you readers of picky should know how i loathe long books). there were SO, SO many pages of quotes i loved that i could share with yall. these were the snippets i wanted to go back and find.

what sucked: it’s SEVEN HUNDRED SIXTY EIGHT pages. there were a couple of instances of backstory that i wished weren’t so lengthy.

having said all that: i LOVED this one. the writing’s beautiful. i love the family dynamic. i am in awe of conroy’s ability to weave tragedy with comedy. it’s REALLY good stuff. yall should read it.