and then there’s this one

i’m still on a good love stories sort of kick. so the next few posts will accomodate that (and yeah, i know. i’ve got a whole lot of things i should be writing about instead, like project: the first, otherwise known as holy-mother-of-god-what-the-hell-were-you-thinking-and-why-haven’t-you-made-a-bit-more-effort?)

i told you what my ten favorite (for the moment) chick flicks are.

only there’s one book i wanna share with you that isn’t so lovey dovey.

why, then, am i including it here?

because it breaks my heart it’s so good. it’s amazing. it’s the most beautifully written story i’ve ever read. EVER.

and it is a love story. of a sort. 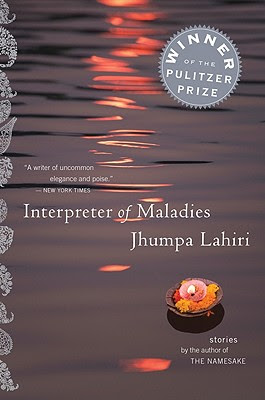 it is the first of those shorts included in jhumpa lahiri’s the interpreter of maladies, which was on my reading list from like five years ago. it is called a temporary matter.

here are a few snippets:

he combed through her cookbooks every afternoon, following her penciled instructions to use two teaspoons of ground coriander seeds instead of one, or red lentils instead of yellow. each of the recipes was dated, telling the first time they had eaten the dish together. april second, cauliflower with fennel. january fourteenth, chicken with almonds and sultanas. he had no memory of eating those meals, and yet they were recorded in her neat proofreader’s hand.

when he heard her approach he would put away his novel and begin typing sentences. she would rest her hands on his shoulders and stare with him into the blue glow of the computer screen. ‘don’t work too hard,’ she would say after a minute or two, and head off to bed. it was the one time in the day she sought him out, and yet he’d come to dread it. he knew it was something she forced herself to do … for some reason, the room did not haunt him the way it haunted shoba … he set up his desk there deliberately, partly because the room soothed him, and partly because it was a place shoba avoided.

it astonished him, her capacity to think ahead. when she used to do the shopping, the pantry was always stocked with extra bottles of olive and corn oil, depending on whether they were cooking italian or indian … when friends dropped by, shoba would throw together meals that appeared to have taken half a day to prepare, from things she had frozen and bottled, not cheap things in tins but peppers she had marinated herself … her labeled mason jars lined the shelves of the kitchen, in endless sealed pyramids, enough, they’d agreed, to last for their grandchildren to taste. they’d eaten it all by now … it struck him as odd that there were no real candles in the house. that shoba hadn’t prepared for such an ordinary emergency.

shukumar: the first time we went out to dinner, to the portuguese place, i forgot to tip the waiter. i went back the next morning, found out his name, left money with the manager.

shoba: you went all the way back to somerville just to tip a waiter?

why did you forget to tip the waiter?

by the end of the meal i had a funny feeling that i might marry you. it must have distracted me.

and then there’s this one

shobar: the first time i was alone in your apartment, i looked in your address book to see if you’d written me in. i think we’d known each other for two weeks.

shukumar: where was i?

you went to answer the telephone in the other room. it was your mother, and i figured it would be a long call. i wanted to know if you’d promoted me from the margins of your newspaper.

this was (doubling as) a matlock project. learn about that here.

8 responses to “and then there’s this one”