an explication of the comedy of errors 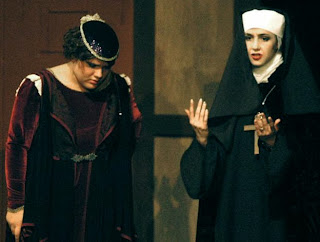 ABBESS:   And thereof came it that the man was mad.
The venom clamors of a jealous woman
Poisons more deadly than a mad dog’s tooth.
It seems his sleeps were hindered by thy railing,
And thereof comes it that his head is light.
Thou sayst his meat was sauced with thy upbraidings;
Unquiet meals make ill digestions;
Thereof the raging fire of fever bred.
And what’s a fever but a fit of madness?
The Comedy of Errors (5.1.68-76)

By using eloquent imagery, orderly structure, and kindness, the abbess reprimands Adriana’s behavior and offers advice. The use of alliteration, assonance, consonance, and metaphor furthers character development, emphasizes the advice, and promotes comedy.

The line, “And thereof came it that the man was mad.” (5.1.68), constructed primarily of monosyllabic words, gains Adriana’s attention because of its simplicity. The abbess believes Adriana’s conflict requires a simple remedy. The shortness of “a” in most words alludes to the abbess’ disapproval of Adriana’s behavior. The repetition of “eth” softens the line, while the resonance of “m” lengthens it and lends it musicality.

The abbess equates Adriana’s jealousy to poison in, “The venom clamors of a jealous woman” (5.1.69). The “s” hisses this comparison, suggesting Adriana’s behavior is vile as a snake’s. The nasality of “n” and “m” draws out the analogy. The repetition of schwa “e” softens it, as though the abbess tries not to offend.

The abbess builds upon the previous line by likening Adriana’s jealousy to “Poisons more deadly than a mad dog’s tooth.” (5.1.70). In making this comparison, she says Adriana has made herself sick with jealousy and, like the rabid dog’s bite, she’s made her husband sick with it, as well. The diphthong in “Poisons” accents the first syllable, holding Adriana’s attention. The resonance of “m” and “n” lengthens the line, allowing the previous to blend into the next. The “d” thuds sharply, as though the abbess thinks Adriana’s hard head needs sense knocked into it.

In, “It seems his sleeps were hindered by thy railing,” (5.1.71), the abbess reiterates one of Adriana’s complaints, offering a reason for her husband’s mindlessness. The shortness of “i” and the length of “e” depict a restless night’s sleep. The “h” and “s” hiss throughout, typifying Adriana’s behavior and the abbess’ disapproval. The diphthong in “by” and “thy”, in such close proximity, emphasize Adriana’s “railing”, proving Adriana has some fault in the matter. These contribute to the image of her husband lying in their bed, trying to sleep, and Adriana standing beside him, “railing”.

The abbess strengthens her argument in, “And thereof comes it that his head is light.” (5.1.72). Most of the words are monosyllabic, again establishing the abbess’ hold on Adriana’s attention because of their simplicity. Despite the presence of “h” and “s”, it lacks the unpleasantness of the previous line. The words flow into each other smoothly. The repetition of “t” gives the line a gentle chiding effect.

The abbess addresses Adriana’s next complaint in, “Thou sayst his meat was sauced with thy upbraidings;” (5.1.73), comparing Adriana’s jealousy to a venomous sauce, which sickens, as opposed to nourishes. The hiss delivers the line more eloquently. The thudding of “b” and “d”, the resonance of “ng”, the length of “upbraidings”, demands Adriana’s attention; its short “u” hints at the abbess’ disapproval. Each defines the image of Adriana’s husband sitting at the table, trying to eat, with Adriana sitting opposite, “upbraiding” him.

The abbess impacts this image by adding, “Unquiet meals make ill digestions;” (5.1.74). She reiterates the importance of providing proper nourishment; she insists meals full of resentment and anger make him ill. The short “u” in “unquiet”, muttering its disapproval, the sharp knocking of “q”, followed by the diphthong, and the gentle chiding in “t”, add significant weight. The resonance of “m” lengthens the line; the sharpness of the diphthong in the first syllable of “digestions” and the hiss of “s” command attention, making the previous metaphor more vivid.

The following line, “Thereof the raging fire of fever bred.” (5.1.75), furthers the image. One imagines a fire crackling in the hearth next to the dinner table. One hears the crackle in the repetition of “f”. The abbess likens Adriana’s “upbraidings” to the fire, making her husband unhealthier by causing him physical discomfort.

She completes the speech with a question, “And what’s a fever but a fit of madness?” (5.1.76), in hopes Adriana will assimilate the advice and see the solution. The repetition of “f” continues, allowing the sentiments of the previous lines to linger. The use of the word “madness” circles back to the beginning. Initially, the man is mad. Conclusively, the situation is and the abbess earnestly provides a remedy to cure that madness. She concocts that remedy by using imagery and kindness. In structuring her advice around each of Adriana’s concerns, she uses maturity and wisdom to teach Adriana how to be a subservient, mature wife. Her earnestness in assisting Adriana heightens the comedy of the play, because neither Adriana nor the abbess fully understands the situation. The advice, though good, will do nothing to solve the problem, thus making The Comedy of Errors a truly comical play.