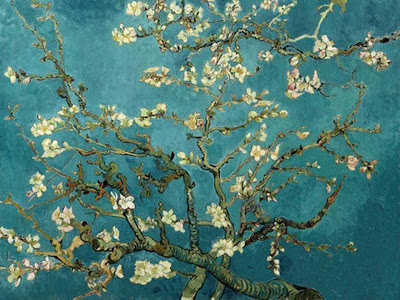 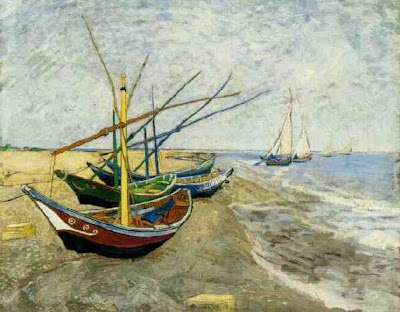 i spent a day in amsterdam. i hadn’t slept on the plane. i got there at eight a.m. and my room wasn’t ready. wouldn’t be until three. so i went sightseeing on vapors, basically. i walked around a while, had lunch at the hard rock cafe, then went to the van gogh museum and anne frank’s house.

i should’ve done these last two things first. partly because they’re both really, really crowded. but more because i was beyond exhausted by the time i got to them.

i took the audio tour at the van gogh museum. part of me was really glad to have done so.

and part of me wasn’t.

they say he had epilepsy. my younger brother said he’d thought there’d been talk about him having syphilis.

i say he had an extreme case of bipolar disorder. but i don’t know.

more often than not, people will say their favorite works of his are starry, starry night, or ones of the sunflowers or the irises. and they’re great paintings.

but they don’t move me.

the first two make me cry.

the almond blossoms…he painted those for his brother and his wife when he learned they were expecting a child. there’s such care in it. such love. but he was in an asylum while he painted it, in more serious throes of agony than he’d experienced. this was done in the last year or two of his life. that he could pull such beauty from him when his mind was being so ravaged…

and then the wheatfields…if memory serves (and i was really, really tired, so it’s entirely possible that i’ve got it wrong, for this and the other), he painted this two days before he died. how bleak. how hopeless.

the narrators of the audio tour said he’d felt he was a burden to everyone.

and here’s me, struck by similarity, standing in a too-crowded room, trying to keep the others from seeing me crying.

the boats, though, they’re a little better. they make me think of my older brother. let me believe he’s in heaven, in a beatifully crafted, brightly colored fishing boat on some grand lake somewhere, with his dog, enjoying the day. this one makes me smile.