a letter to my forty-four-year-old self

a half hour or so before midnight, i was scrolling through my twitter feed and came across this bit of hideous nasty: 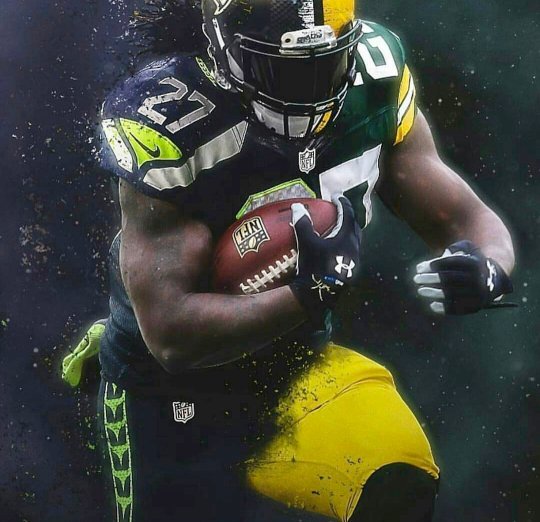 that’s eddie lacy, formerly a running back for the green bay packers, which is my favorite football team (there was a period of loathing… the brett favre era, but the moment aaron rodgers began taking snaps i began to love them again). next to marshawn lynch (who played for my second-least favorite team, the seattle sea hogs, as my nephew calls them), lacy is the best running back in the nfl. so i was mad as hell when i learned he’d exchanged a packers jersey for a hogs one. son of a bitch.
that’s not really relevant to this post at all, by the way. i just needed to vent.
this post was inspired by lecy’s letter to her forty-five-year-old self. she’s one of the gals i met through the peaceful posse facebook group for bloggers. so far i’m enjoying being a part of that. anyway, when i read her post, i loved the idea of it. it’s easy to write a letter to our younger selves, which allows us to look back on our lives and see where we’ve improved, that we’ve endured and maybe offers others who are younger a bit of insight. it’s easy, sure. but it’s also good to look at where we are now, how good we’re doing now. and for the most, part, i’m doing okay. now. last year, no. i was not good. AT ALL. the year before that was as hideous and nasty as that photo of eddie lacy. one of the three worst years of my life, actually. i survived it. thank god.
i’m in this bible study in which we’re examining john’s retelling of the apprehension and crucifixion of jesus, and one of the statements made by the woman leading the thing was something about how often we don’t see the times jesus is protecting us. in my life, especially in my adolescence, i’ve felt as though he were absent.
and that statement brings to mind a bit from an eposide of a football life, one featuring steve gleason and his efforts to climb machu picchu. gleason’s got als, and climbing it meant spending significant time working with with doctors to ensure his lungs could handle the changes of and higher altitudes. climbing it meant having people carry him up. the night before, he said to his wife that he felt jesus was absent. and then at dinner, a woman, one who was terrified of heights and was celebrating with her husband after having climbed the mountain, she was wearing one of gleason’s no white flags t-shirts. she saw gleason and spoke to him of how he’d encouraged her to make the climb. that’s how jesus works.
there’s an older couple who lived outside of the delivery territory of the newspaper for which i once worked, and so i would bring them the paper every week. i’d not seen them in a while. i’d stopped by the office of another friend, seeking job hunting advice, and during our visit, she’d asked me if i’d seen that couple in a while. i had not. so i stopped by their house that evening. the woman learned while i was there that her mother, who is blind and going deaf and having night terrors, isn’t eligible for hospice care — a crushing blow. had my friend not suggested i visit them, i would never known of this. looking back on my life there are so many times where it seems the hand of god has lead to me help others, to be there for them when they’re most in need of it. i can see, now, how his hand has lead others to help me. i don’t feel as though he is absent, but there is still a wide chasm between us. i’m working on a way to cross that.
i’m working on a way to see the good that’s come from carrying my cross, because we all have one. i’m working on spotting the collateral beauty that’s born of the damage. i’m working on a lot of things.
sure, there are things i’m lacking in my life — gainful employment, the ability to love and be loved by a good man, my own place, the family of my own that i’d hoped to have by now, a published novel. okay. that’s a lot of lack. and this isn’t turning out to be anything like a letter, but then i never do anything normal. not really. and that’s okay.
i’ve made some damned fine friends this past year. some REALLY good ones. one of them’s making me chicken spaghetti, and another’s making me paula deen’s bananas foster bread pudding for our book club meeting tomorrow night, and we’re discussing one of my favorite books — the language of flowers by vanessa diffenbaugh. how fortunate for me that i got to make the suggestion for this month’s selection and the group went with it. i finished rereading it sunday, and i loved it SO MUCH MORE the second time around. the past couple of weeks, i’ve been getting texts from the gals in our group telling me how much they loved it. that made me feel good. that food tomorrow night’s gonna make me feel good. i’m gonna be ten pounds heavier afterward, but so be it. most of all, their company’s gonna make me feel good.
so… from my current self to my future self so when i can look back on this a year from now or ten, i can know where i stood when i was here, and that it was a good enough place to be:

not every day’s gonna be good. this week, like every other, is a testament to that. you’ve got an abundance of compassion and resilience, and yes, tenacity, to help get you through the uglier days, to help others get through theirs. you’ve got those damned fine friends to lean on and laugh with. revel in that. you cannot fuck your life up, no matter how much it might seem as though you’ve done or are doing so. you’re not that powerful. god’s got this. remember that. and your plan for your life? yeah, let go of that. try to see his plan.

your room is clean. kind of. the bed’s not made. your desk and closet are a disaster, and you’ve got stacks of papers spread out in your brother’s room, but at the moment, you’re attempting to make sense of the chaos, which is something you rarely do, so yay for that. you’ve kept your car clean for a whole week! YAY. you’re about twenty pounds lighter than you were two months ago. FUCK YES. all these things are good. all you are is. ALL OF YOU. even those traits you’re not so crazy about… they could never be as ugly as that sea hogs jersey.