a few of my favorite things

i am a republican, though i’d say i’m a pretty moderate one. my friend tyler is a democrat. a devout one. in fact, she is more devoted to the democratic party than any other person i know. sometimes the things that come out of her mouth make me cringe and shut my browser because i can’t stomach the sentiment. her steadfast support of hillary clinton is, to me, both admirable and abominable.

but she’s my friend. warts and all, god love her. i hope she would say the same about me.
today she put up a post called the little happies.
i’d started a similar post this morning… this one. but i stopped because i’d spent so much time on twitter reading all the rantings about how horrible trump is going to be for this country, which made me cringe and shut my browser a few times. i was showing my mom some of the snippets of vitriol and i’d mentioned to her that if i went to tyler’s twitter, i’d see all kinds of things that would hurt my eyeballs. when i finally looked, the second thing there is a link for that post and a picture of a crayola caddy and a girl coloring in the background. this is why i love tyler. that right there. because despite her love of the democratic party (not to mention sooners and razorbacks) she will say or do something that will remind me that once upon a time, if our paths were to have crossed as children and we’d been playmates, we would’ve been coloring at the same table. only my book would’ve been something disney or care bears.
anyway… i read her post. at the bottom of it, she’d welcomed hearing of others’ little happies. so here are some of mine:
one. my friends ann, kelly, lara and jenn. the first three are my writing friends and members of the critique group i’m in. if i don’t go to group or join them for a morning writing session, they’re quick to question why i’m not there, quick to say they miss me. i’ve never really known that kind of friendship. i’ve never had friends like them. i love that i do now. and jenn… the woman’s a miracle, really. that our paths have crossed is a wonderful blessing to me. that she thinks so highly of me is one, as well. just yesterday, she was saying how i needed to stop being afraid of success. that i need to quit depriving the world of me.
two. i was about to haul my butt to austin to see a movie. i hate austin. it’s full of liberal longhorns and coated in burnt orange. YUCK. but i so wanted to see joel edgerton in loving because i’m confident he has delivered an oscar-worthy performance in it that i would’ve made the trek. then i learned that river oaks theater in houston will be showing that film on friday. it’s not gonna be an easy movie to see. i know that. but i’ve watched the trailer for it a dozen times now, at least, because there are parts of it that fill my heart with such wonder. like when he and ruth negga, playing richard and mildred loving, are sitting there and he says i can take care of you. she lays her hand on his back and says i know that. my eyes well up every time i watch that, but they’re happy tears. and in the last scene in the trailer, when he says tell the judge i love my wife, those tears fall. because it’s beautiful. everyone should know that kind of love. how they know it shouldn’t matter.
three. coca-cola fizzing in an ice cold glass.
four. i’m kind of getting burned out on writing again. that’s not a good thing. right now, as valuable as those friendships with fellow writers are, ultimately what keeps me going is the love i have for my work. the pieces i’m playing with right now haven’t gotten nearly as much of my attention as others have. they are the murky middle, and if i can’t make them good, then the scenes of isabel and reese that i favor, like the one below, won’t matter. 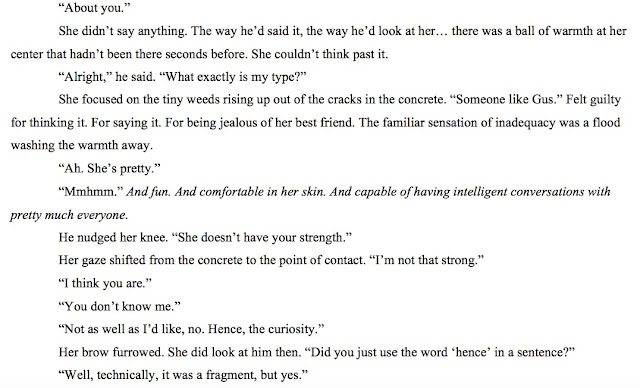 this one makes me happy. lots of the ones i’ve written do. that’s a hard thing for me to remember sometimes, so i’m kind of glad i’m putting it down here.
five. pappadeaux’s. i spend more time there than anywhere else. i probably spend more time there than the employees do. but i’m there, really, because they’re there. they’ve been a huge help to me on many occasion.
six. lord of the rings. tyler says she’s a bigger tolkien fan. i’ve never read the books, so that may be. but i’m pretty sure i could go toe to toe with her on the films. that’d be a fun thing to fight about.

2 responses to “a few of my favorite things”